Meet the The Grounds Guys of Wilmington Team 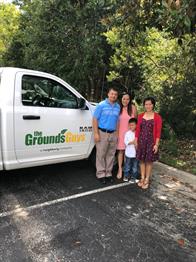 Nick joined the Navy after High School in 1988. He retired after serving 25 years in 2013 and married his wife Rizalyn in 2012 while stationed in Okinawa Japan. They stayed overseas until 2017 when they returned to the states. In 2018 they moved to Wilmington, North Carolina to be close to family and open The Grounds Guys with his Brother-in-Law Kelcy Swickard. Nick is joined by his wife Rizalyn and children Reika and Christian.