A Caring Team in Your Own Backyard

There's no place like home. And when home is Union, MO you know that home is more than just a place- it's a community. That's why the Grounds Guys are proud to have a team of individuals who are committed to serving their area and the people in it. Want to learn more about the people behind our dedication to excellent service? Get to know the stellar members of our team by reading below. Phil grew up in Hermann and moved to Union in 1983. He's married and has two kids. He is passionate about what he does and enjoys what nature has to offer. He particularly loves the Missouri River and the history it brings. When he's not in the yellow & gold uniform, you can find Phil giving back to the community, reading, traveling, or playing around on his jet ski.

Fun Fact: Phil has been in the landscaping business since 1976. He purchased Platt Landscaping in 2004 and became a Grounds Guys Franchisee in 2012! 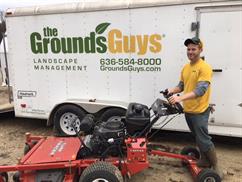 Stephen has been with the company for almost a year. Stephen and his fiancé have a 2-year-old son and will be welcoming a baby girl in June 2017. When Stephen isn’t enjoying the smell of fresh-cut grass, you can find him manning the grill and watching college football (Go UGA!).
Fun Fact: Stephen is from Georgia